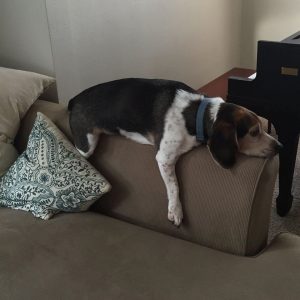 As many of you know, we have a beagle/hound mix dog named Duke.  On the morning of July 5, 2019, he woke up having recovered from all the “booms” of the 4th of July.  As with this particular breed, when he hears these things he barks and howls.  So even with some melatonin he was a bit on edge for most of the night.  However, on the morning of the 5th he walked across our great room, stopped, stretched and went into a yoga position known as downward dog and from there he went to another position called cobra.  Now those of you, like my wife, who are adamant yogis, know what I am talking about but for those who are not, a downward dog is where one bends forward and down on their arms, while putting the rest of the body up in the air.  They then slowly move to lower their body to the ground. The cobra is then when you have completed the downward dog and you are flat on your belly and then you raise your head and torso up into the air.  If you are still confused, just Google it.

At any rate, Duke started this move.  The only problem was he stopped about midway through the downward dog and then went right into the cobra.  He would have brought raised eyebrows to any yoga practitioner. But he is a dog after all and probably knows nothing about yoga or yoga poses. He just knows what feels good and what feels right.

Now you should know, as an older theologian, I would find a religious spin to Duke’s “lukewarm” approach to this practice.  In fact, it reminded me of what Revelation had to say to the church at Laodicea. In Revelation 3:15 the church there is reminded of their works.  Specifically, “I know your works: you are neither cold nor hot. Would that you were either cold or hot!”  The next verse then goes on to say, “So, because you are lukewarm, and neither hot nor cold, I will spit you out of my mouth.”  The Greek word used there for lukewarm is “chliaros” which is an adjective that means that something is tepid.

Archeologists have uncovered that this city was close to a hot springs and an aqueduct had been built above ground to deliver the hot springs water to the city.  The only problem was as the water was traveling, it would get tepid.  This community knew how disappointing it was to have tepid water.  The text also strongly frowns on that sort of behavior from followers of Jesus.  The phrase in the text that suggest lukewarm Christians will be spit out of the mouth of God is an idiomatic expression meaning to be “totally rejected”.

WHO IS REALLY WATCHING BESIDES GOD?

I grew up at a time and a place in Sunday School where the theology was simple – God was watching you every moment and you better not do anything wrong.  No telling lies, no using profanity, no stealing something – because since God was watching, your punishment was imminent. Today I am reminded of the humorous story that goes… A boy one time was in the fellowship hall of a church before a big congregational meal with no one else around.  At the beginning of the food table was a giant bowl of rolls.  Nearby was a sign which read, “Take Only One Roll – Remember, God is Watching!” At the end of the long serving table was an assortment of home-made pies.  The creative young boy got a marker and paper and wrote another note.  It said, “Take all the pies you want because God is busy watching the rolls!”

Fast forward to today.  I recently heard of a report about something the University of Alabama was doing.  Since their football team seems to dominate most other teams, they were finding many fans were exiting during the fourth quarter because of the score being a blowout.  So, using the locator device on all cell phones (unless you turn that feature off) they were able, by cell phone, to tell who stayed at the game the whole time and who left early.  If you stayed for the whole game, a text or Facebook post was sent to your phone with a coupon for a discount on either some food item or the next home game.  This begs the question – who is now watching?

I have often thought God had a lot better things to do than watch over my every move and I have come to have a theology about God based on God’s perfect love for me that brings into my life God’s grace by the saving power of Jesus Christ.  Not a theology that God is waiting for me to mess up.  God already knows I will mess up.  That is where Grace and forgiveness come into play.

In this day and age of not just electronic surveillance with hidden cameras and microphones, but with face recognition software; gait walking (how you walk a certain way) recognition software; satellite imagery and yes cell phone locators, we may have a lot more to worry about than God watching us.  In a way, I am glad when God is watching because God will see not just my mess-ups but my moments of praise and worship along with my moments of being the type of follower Christ called me to be.  And for that, I say, “Thanks be to God”.